Mom Wrecks Our Car on a Mountain Road

Let me backtrack a little bit here.   I think that when this happened I was pretty small, about four or five years old.  Since it involves the geographic area where my grandparents lived and my memory of those hills, I know I was pretty small and I don’t think we lived in San Diego quite yet.  This memory is a bit disembodied, scary, and left out of its time frame because it is for me, in a fragmentary part of my memory as well. There isn’t anyone alive who remembers it anymore, so I will just do my best here with telling the tale. 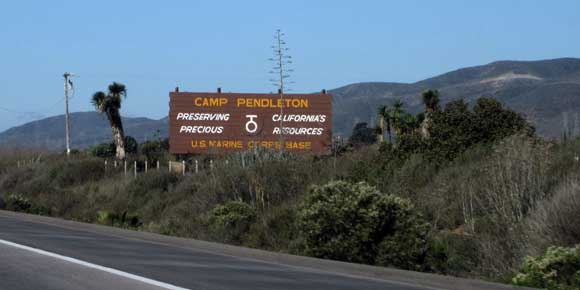 Perhaps my mother was still working in the Pro Shop at the Camp Pendleton Marine Base.  That is the only reason I can think that we would have gone there at all.   I know she worked there for a while, and that she met my youngest sister’s father while she was there.  He used to call me Pumpkin and I remember him as a very kind and funny man who took us to the beach and held my hand as we walked in the shallow waters.  But this was something that happened in December.  There was a big party at Camp Pendleton, with a Santa for the kids, the Marine Corp Band, cake and I think some presents.  Mom took Sally and I to the base for the festivities.  I don’t really remember the drive to get there, it is the drive home that is burnt into my memory like an Old West branding iron.

I think she drove from the base over through Highway 76, to Bonsall, then across the cattle guard onto West Lilac Road as it wound around the hills where some years later I would ride the school bus home.  The road was a series of “s’ curves and hairpins that wound around the curvature of the mountains and hillsides that dropped down slowly and then steeply to the San Luis Rey River bed.  There were only two lanes and a sharp drop off on the down hill side of the road, where the earth travelled through dry creeks and narrow canyons.  I vaguely remember sitting in the back seat with my sister, with my shiny patent leather Mary Janes and lace edged white socks jutted out in front of me.  I don’t think I was watching the road.  We were singing Christmas songs as we wound our way to the Williams Ranch, where our grandparents lived and cared for 29,000 laying hens, two cows, a small citrus orchard and a one acre garden.

Suddenly, the car crashed into something, I think a boulder,  and went airborne; the car rolled off the side of the road and somehow stopped short of travelling to the bottom of a ravine, hung up just in view of the road, clinging to an outcropping of the black and white speckled granite that was common there.  It seemed that my mother was ejected from the car while it was still on the road, perhaps when it went airborne, and as I sat there crying, hiccupping, screaming I saw her there, lying unmoving, but I was trapped somehow, terrified that someone was going to run my mother over, killing her,  right there where she lay in the road, not moving.  My little sister screamed and cried along with me.  It seems like it went on forever, and then we were on gurneys in the emergency room, the screaming was over, but not the hiccups, and they had my mother with a mask upon her face laying on a gurney.  It was loud in there.  There was a lot of shouting of words that I didn’t know.

I don’t remember the Christmas that followed that car wreck.  The memory of it is obliterated in a wash of other Christmases at the ranch.    I think the next one I was in first grade and got a blue two wheeled bicycle with training wheels, and a new baby sister named Sharon that was born in July.  Before the New Year, I ran down a weasel that was running out from one of the chicken houses, and I remember screaming then too, as I ran across it with the big wheels and one of the training wheels, as if I had killed it.  I never really knew, because it ran brokenly down into the ravine off the side of the dirt road never to be seen near the chicken houses again.