I was so very tired when I arrived in Italy. We had only about 3 hours of sleep when our mini cab came to take us on a 45 minute drive to the airport at Stansted, where we were required to arrive two hours prior to our 3 hour flight’s departure. The trains were not running on Sundays between London and Stansted as a result of improvements being made to the tracks. In London there is an express train that takes not much time at all to get from the City to the airport. But such luxury would not be ours. We wiggled our way through all kinds of serpentine streets and made our way to the airport where resourceful, and youthful budget travelers had made their way early and were camped out on all the free seats and had spilled over on to the floor everywhere in the terminal. We fled to the airport café, dragging our wheeled luggage in tow and waited for the window to open. Ah! A table with two chairs and something warm to drink. 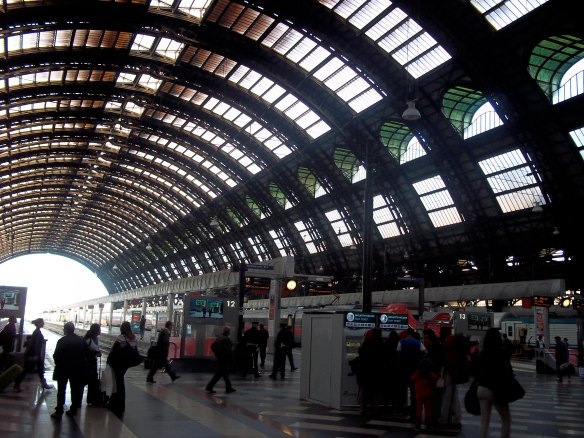 Riding the train from the airport in Pisa, Italy toward Firenze (Florence), I began seeing rainbow-striped flags hanging from the windows. I began watching for them and quickly saw that the word “PACE” was centered on them. Peace. After we changed trains in the amazing 1930’s Art Deco station in Firenze and headed toward Cortona, I continued to see these flags hanging from multi-storied apartment buildings, grand homes, overpasses, ruins and hung by farmers out in fields of grain. Sometimes there were six of seven flags hanging on the laundry lines on the side of an apartment building. They were everywhere! As we passed through amazing, long and dark tunnels through the hills of Toscana I saw more and more of these flags. Clearly, many of the people of Italy had their minds focused upon Peace and they wanted one another to know about it!

And I felt as if my prayers were being heard somewhere in a language that I did not speak. “Join me in this prayer for peace.” My meditation became “Pace, pace, pace…” as I rode through the ancient pastoral landscape, past the ruins of fortresses, towers, gorgeous vineyards and fields of grain, lovely gardens, orchards, olive trees and stopping at every station, where I saw more and more “Pace, pace, pace.” And then I saw Cortona and its glorious stone buildings on the hillside, imposing, powerful, overlooking the valley below it.

When we arrived in Cortona by taxi from the train station in the town of Camucia at its feet, we sat in the square at a café with our luggage all around us awaiting the key to our little apartment, it was 3:00ish as I looked up to see the time of our arrival on the clock tower which we sat beneath, and to the right, hanging from a Citta de Cortona office window there was another flag, I was home for the month: “Pace.”