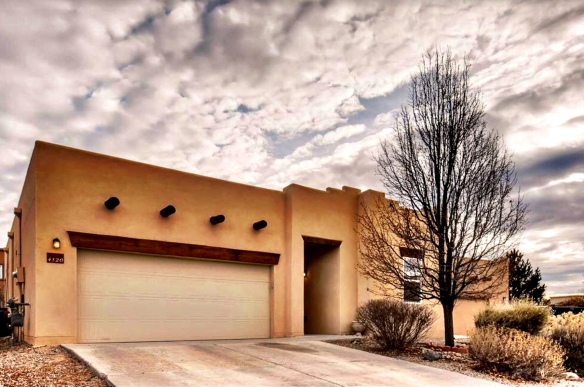 This was the photo of our home posted to the real estate websites. Sometimes the sky does look like this in Sante Fe, particularly in late Fall.

It was a daring, if geriatric, adventure to sell our gorgeous Bellingham home, move to Whidbey Island & come to realize we had made a very expensive mistake. I turns out that I wasn’t cut out to get along with some folks, particularly those whose politics remain unexamined & reflect a lazy acceptance of the dogma of our youth. I don’t feel like schooling any more men or their codependents. Given the conditions in our current culture, I just don’t have the nerve for getting along with recalcitrant men. One man who is occasionally recalcitrant is enough pressure for me. The adventure got even more daring when we decided we wouldn’t build a home in cohousing after all & we soon discovered that we couldn’t afford the good homes on the island.

So we patiently waited to sell our building lot & went through the extra requirements that such a choice entailed. It was simply more complicated than selling our house. In February we flew to Albuquerque & rented a car. We stayed with our much beloved friends in Placitas & took their recommendation of a real estate agent, Rose. We met up at Java Joe’s in Santa Fe & at the end of the day after looking at little traditional Santa Fe houses with flipper upgrades we didn’t like & townhomes, a couple of modern loft condos, Rose took us to see the house we bought. But first we went to eat & I got a Navajo Taco with Christmas chile.  Delicious!  While we were sitting there everything we would have to do to make this house work occurred to me. So we made an offer that was about 96% of asking price & it was quickly accepted. It under appraised & we revised our offer to the appraisal & that was accepted too.

That is when the adventure began really. How were we going to schlepp all this stuff, including about 1000 square feet of stone tile & a 1963 Airstream Globe Trotter?

We were exhausted but drove North to Oak Harbor for a bite to eat at an Applebee’s where we could park these beasts. 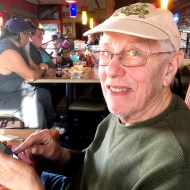 We didn’t get all that far, we were too tired to trek across I-90 in the dark. So we stayed in Bothell.  Three people, two cats & one dog.

The next day was a nail biter. Blizzards & fog interrupted momentarily by a drive through farmland on the way to cross the Columbia River into Oregon. Once we gassed up in Pendleton we drove up the side of a mountain into darkness & much worse conditions. There are no photos from that leg. We couldn’t see reflectors or stripes & we knew that there were many huge crevices alongside the highway. When we stopped at a rest area on the other side of the pass we were all so shaken & relieved. We decided to stop in Boise & get the heck off the road for a while. Not one of us wanted to go further.

Visibility through the Cascades 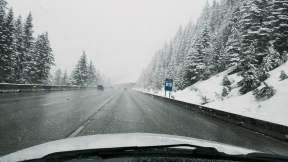 Boy was this a relief!

This meant that we had to book another hotel because we wouldn’t reach the one we had arranged. We never caught up with our prebooked & paid accommodations & spent more than we budgeted. Still, who knows how crazy such a trek will be? We had a 79 year old driving Penske’s biggest rental truck & he did a pretty good job once he got away from our storage facility in Freeland, Washington, where he tapped a wall. Everybody was relieved to get to the hotel, which was quite a few more miles. 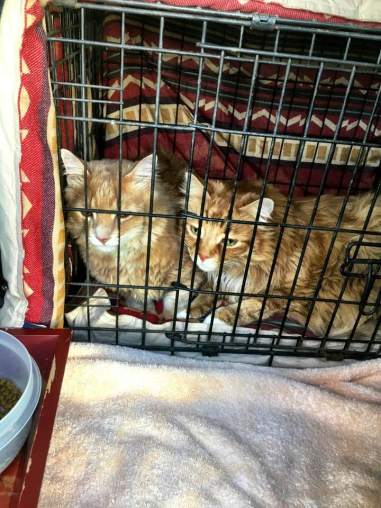 The back of the Highlander was a traveling kitty condo 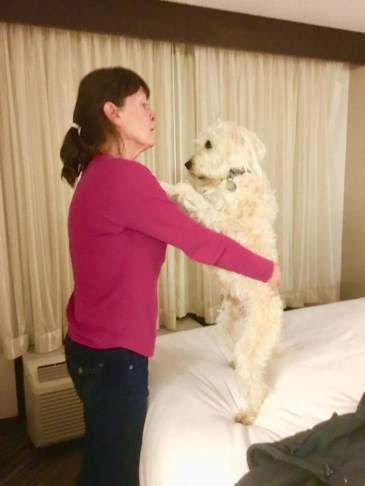 Jack was so happy to see Mom

The kitty boys & Dan relax & those are my legs under the blankets.

We stayed another day in Boise to untangle our nerves & then we hit the road again. We ate wonderful Thai food in Sandy, Utah & then stayed in a terrible hotel later that night in Green River, Utah. The next day we had a bite to eat in Bernalillo, New Mexico before driving up to Santa Fe to meet Rose at the house to get the keys. We slept on the floor and in a few days the house looked like this: 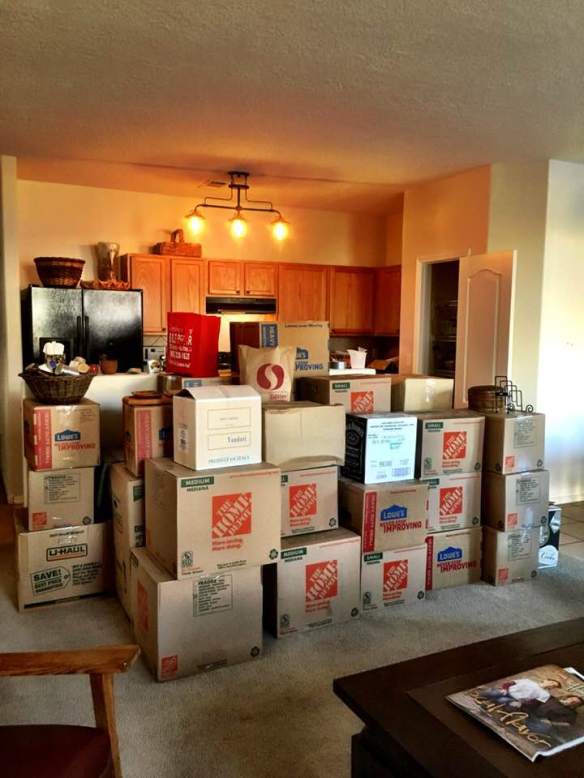 There is a kitchen in there somewhere!